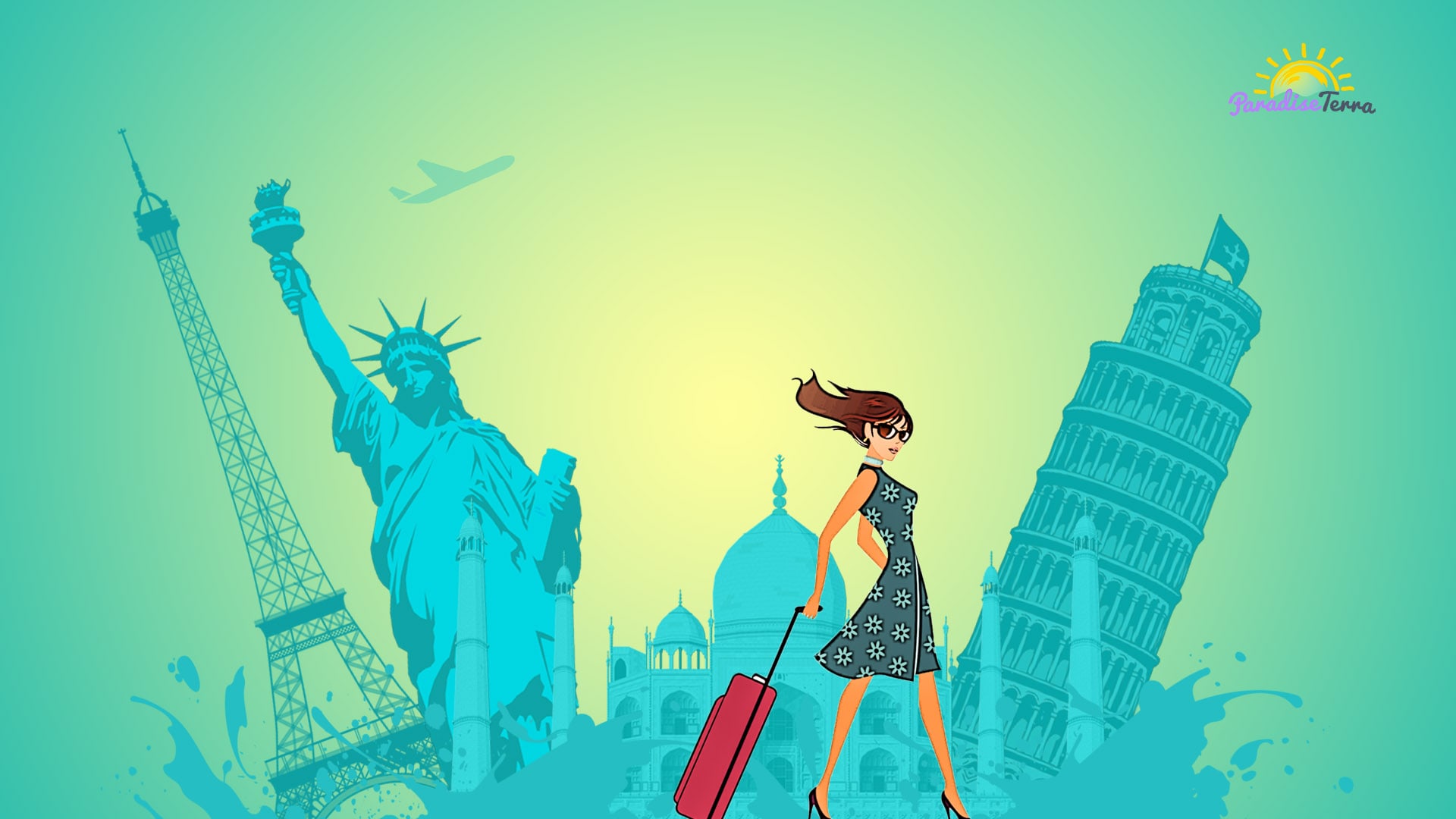 Travelling is an art, practised by mankind since ages. It’s more than just the journey and the destinations, travelling is more like an explorative thing by its nature. Years ago, we would see a rather unfortunate kind of gender skewness in the data of travellers.

It showed that men travel more than women and this saturation would go to more heights when it came to travelling solo. Since the world has not really been a ‘safe’ place for women to travel alone, the women of the world have changed the trend.

Now, the tables have turned and as it turns out, women tend to travel solo more than men do. Women have outnumbered men in solo travelling to almost two to one. Even the companies providing tourist packages and services seems to inform that they have witnessed more female travellers than male in the past few years. That’s incredible, really! But what makes this trend really a topic to discuss, what are things that make women feel safe and adventurous at the same time, what are the female travelling trends in 2019? Let’s see in the coming sections!

In a society that we live today, a lot of things have boiled down to gender neutrality. That’s the magic of living in a progressive world! Slowly but surely steadily, the time has come when things like travelling don’t have to be different for men and women and this is the best thing you can read today.

Although individualism has its root in the 18th century, it wasn’t really a practical thing for many societies until the 20th century came. Also, travelling used to a necessity for people rather than being a leisure activity and they only used to travel for work. Companies would prefer to send the male employees for outdoor projects and that pretty much explains the whole scenario.

Then came the time when people started appreciating the real joy of travelling, to explore and to get into the culture and traditions of other people. Then, travelling became more about getting to know yourself, going deep within your soul and pushing your limits to see what’s out there in the beautiful world. It becomes less about the gender and more about the aesthetic practice, that it is. So, what’s it like for a female for travel alone? How is it for them to overcome the major and minor roadblocks and essentially, what are the female solo travelling trends? Read on to find out!
Women going solo!

Whatever the gender is, going solo for the first time can be one heck of an experience. It can truly be the overdose of adrenaline shots and teach you things that you won’t learn otherwise in your life. It’s raw, difficult and the most rewarding experience one can have! So here are a few things that instigate women to travel solo and how it makes their life different from others:

5 Best & Cheap Vacations Everyone Should Take in Their Life

Travelling solo surely is one big responsibility on you for yourself and for those who are close to you. If you’re all by yourself, you ought to become more outspoken and confident about yourself. You may have to explicitly go out and talk to random people for directions, take that late night cab back to your hotel, make the whole itinerary for the trip and be confident to catch your things on time, take care of your stuff while you’re roaming about in an unknown street while managing to not look like you’re alone or you don’t have anybody else by your side.

These small yet big things will make you more confident about yourself and this why women tend to go alone. They want to test themselves and surely, they are passing with flying colours. Women, for a long time, have been assumed to be less confident and these acts can speak up for how much confidence they can be. It also makes them feel positive about themselves.

Relying on someone else or your partner to take time out and plan a trip together can be frustrating and make you feel less of yourselves. Women who just make things happened for themselves are more towards the independent side. Hopping around in new cities, learning the local lingo and making new friends is all about travelling solo. It makes them feel more independent and less accountable for the things they actually want to do in their life.

Women usually like things to be planned and under their control and especially when it comes to travelling. People fear the unknown consequences that may come their way and put them in troublesome situations. This is what keeps most women away from going out alone. When women travel alone, they learn how to mould oneself in the situations that may occur and accept the fact that no matter how much you’ve planned and plotted, things can any way go out of hands. This acceptance is rather very important in life also.

When it comes to travelling alone for a woman, there’s a lot of fears and taboos associated with it. for those who want to conquer these fears, travelling solo is the best thing to do. To face our fears is the best way to overcome them, right?

For a long time, travelling alone for women who are married or have partners have seen with a bad eye as people think of it as an opportunity to cheat their partners. But that’s like the last thing they have in their mind. Travelling solo for women is more about having the excitement of being a completely responsible person, getting to see exciting locations, doing what they want to do and of course, feel the ultimate freedom of travelling alone without having anyone to tell them what to do and what not to do.

While these reasons are more than enough to explain why women travel solo more than men, there are few things that can be kept in mind while you ladies are stepping out alone.

5 Common Travelling Mistakes You Are Making

Some Tips For Woman

a) Don’t give your details to the strangers or any random person you’re meeting in your way. Obviously, you are smart enough to keep that in mind. But, here even giving our your hotel’s name, the duration of your stay, your bucket list locations, these things can land you in some unwanted situations.

b) Always try to keep some of your friend or family member updated about your location. We do not mean to interrupt your freedom but having someone who can check on you isn’t bad either. Every time you’re planning something that’s not already planned and you have the slightest hint that anything can go wrong then just drop out a text so that you can be tracked down in worst of the situation.

c) If you’re in a country or place that is not really safe for women than try to keep your arrivals and departures during day time. This will save you from the fear that your taxi driver will drive you off the road while you’re on your way to the airport.

d) Even though you’re precisely planned out and have every single detail are written down and everything is just going according to your plan, things can still go missing. Be prepared for that kind of thing and do not feel disheartened and do not rush into things. Rushing will make you less careful and more vulnerable to take the wrong way.

e) Always carry your safety measures with you. Irrespective of whether you know self-defence or not, it will never harm you to carry a sharp object or a pepper spray or anything to fog an attacker. Be alert if someone is following you and try to deceive them if you’re walking by going to a wrong place. If you feel that you’re being eyed upon, go to a crowded place, the market or take the metro. People around you will automatically make you feel safe.

f) Do not go wasted, if you’re drinking in a club or with a group of new people you just met. Drink to the point where you can take care of your own. Never assume that the people you made friends with are going to drop you back to your room safely. If you’re planning to drink the night away then do it in your room.

g) Understand the local culture and try not to go against it. In some countries, certain dresses are not ethical to wear or completely banned. Take a look at such things in advance and also while you’re interacting with the local public. Being too forward in some places can put you in trouble.

h) Trust your instinct. This is the utmost rule of thumb. If you’re ignoring your gut feelings than you are likely to be in a problem. If you’re trying to do something that is very unusual for you or if the destination is too far to reach, make it for a later time. Start by doing easier things first and once you’ve learned to read situations then only you can put yourself forward for adventurous trips or destinations.

Having said these, we also want you to know that if you’re a woman who has never travelled solo than you should absolutely plan to do it. Not only will it change your perspective about yourself and your life but it will also make you feel flabbergasted that you did it! It will give you a new respect for you and make you feel good about yourself!